Just a few years ago, the average gaming laptop was a 3-inch thick, 12lb behemoth with a 30 minute battery life. Now, in 2018, thanks to Nvidia’s Max-Q technology and Intel’s Coffee Lake processors we’re seeing some of the thinnest, lightest, most portable machines ever produced that don’t sacrifice performance. So, without further ado, here we have our list of the best gaming laptops released this year, for those looking to game on the move.

All of the laptops in this list use Intel’s latest 8th Generation Core processors, with the 6-core i7-8750H making the most appearances. All of these laptops also have the latest Nvidia 10 series graphics, ranging from the GTX 1050Ti on the more budget-friendly models to the super-high-end GTX 1080.

Displays with fast refresh rates of 100hz and above also appears to be the new standard in gaming laptops of 2018, along with super-fast NVME SSD’s for storage. 16GB of RAM is also the new minimum – all but one of these machines have at least 16GB of DDR4 memory at speeds of between 2400 and 2666mhz, while one (the Asus ROG G703) bumps that up to a massive 64GB. 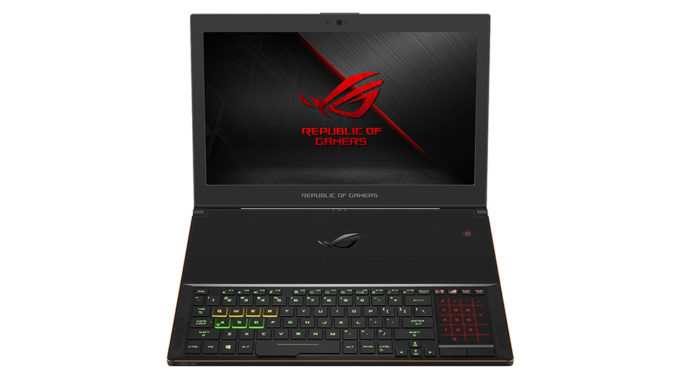 Billed as the “World’s slimmest gaming laptop with Nvidia GeForce GTX 1080”, the ROG Zephyrus GX501 is less than 18mm thin but still packs a hell of a punch. The Intel Core i7-8750H CPU coupled with the GTX 1080 graphics chip means that it’s capable of handling the latest high end games at ultra detail levels without missing a beat. The 1080p, IPS display has a staggering 144hz refresh rate, a 3ms response time and is rated at 100% of the RGB colour gamut. Main storage is provided by an NVMe SSD providing excellent transfer speeds, making the system more responsive and games loading time reduced significantly. Thanks to Asus’ innovative airflow design it also runs virtually silent, even under heavy load.

Bottom line: It may be expensive, but this is cutting edge, desktop level performance in a chassis just 0.7″ thin. 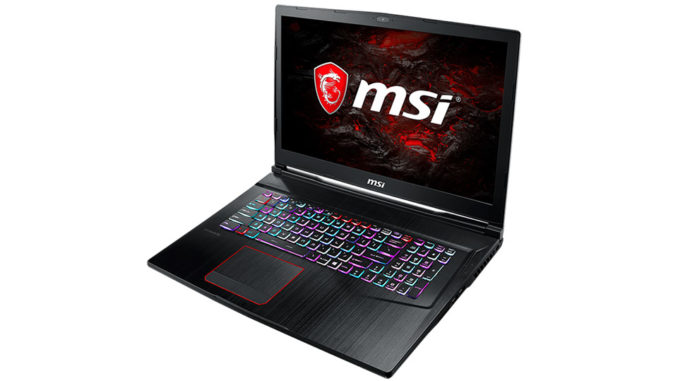 MSI’s GE73 Raider has the same 8th generation Core i7-8750h as most of its brethren, accompanied by a GTX 1070 8GB graphics chip. While obviously not on a par with the GTX 1080 featured in some of its more expensive competitors, it can still easily handle the majority of current games in ultra details at the native 1080p resolution of its 17.3″ 120hz display.

You also get a USB 3.1 Gen 2 type-c port, full aluminium alloy design, and a fantastic per-key RGB keyboard by Steelseries.

Bottom line: The fast Intel Core i7-8750H CPU, paired with the Nvidia GeForce GTX 1070 provide a great basis for a modern gaming laptop in 2018. The display is larger than most, at 17.3″ and 120hz, but the chassis design hasn’t changed much since the last revision in 2017 meaning it’s thicker, and heavier than many others with a similar specification. 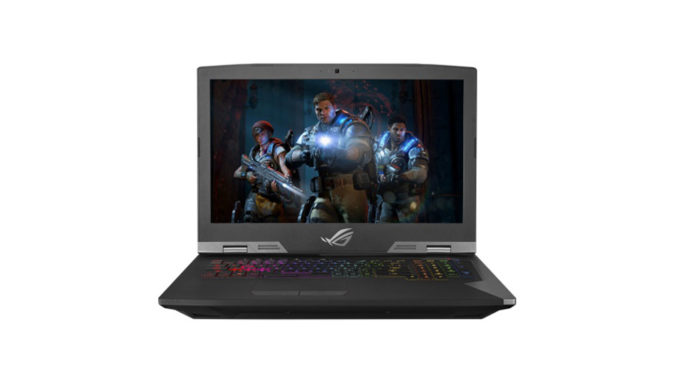 Reading the specs for the Asus ROG G703 feels like reading the dream specs for the ultimate laptop possible on the planet today. And that’s exactly what you get with this machine. The Intel Core i9-8950HK is Intel’s top of the line processor in the Coffee Lake lineup. Combine this CPU with the factory overclocked GTX 1080 8Gb graphics card and you have a laptop capable of running any current game at maximum details. Three NVMe SSD drives in RAID-0 configuration provide an astonishing transfer rate of over 8 GB per second, meaning that games load almost instantly. The 17.3″ LCD screen has a 144Hz refresh rate and is G-Sync compatible to prevent tearing. On top of all this the machine comes equipped with a full 64GB of DDR4 memory running at 2666Mhz.

Of course all of this power comes at a cost, and not just a financial one. While many of the 2018 gaming notebooks can claim to be thin and light, the G703 is one of the largest 17.3″ gaming laptops on the market at almost 2 inches thick – almost 3 times thicker than some of the other laptops in this article.

Bottom line: Looking for the ultimate gaming laptop? This is it. No other laptop on the planet can compete with the Asus ROG G703, in terms of performance or features. This is the Lamborghini of gaming laptops, and has a price to match. If you don’t mind carrying around a bit of extra weight, and you have deep pockets, this is the gaming laptop of your dreams. 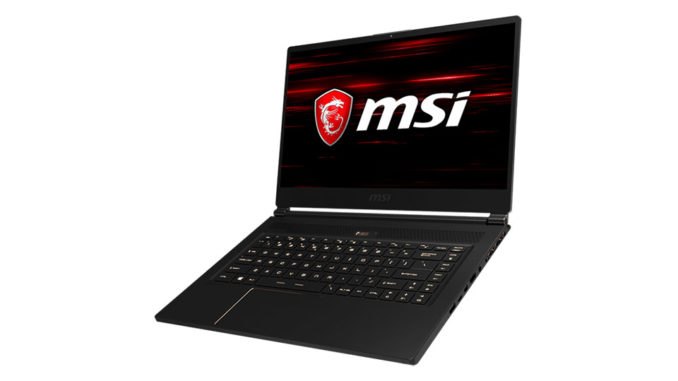 The most striking first impression from the MSI GS65 Stealth Thin are the amazingly thin screen bezels. The 15.6″, IPS display has super-thin 4.9mm bezels, and a 144hz refresh rate. The screen, along with the black and gold design and the 17.9mm thin chassis make this the most visually striking laptop in this lineup. There’s nothing to disappoint internally, either. With a GTX 1070 and the latest Core i7 8750H processor, the GS65 Stealth Thin is up to the challenge of even the most demanding games. Thanks to MSI’s partnership with SteelSeries, you also get an excellent per-key RGB gaming keyboard.

Another welcome addition to this model is a Thunderbolt 3 port, giving you access to ultra-fast external storage, or the option of connecting to an external 4K display at 60hz.

Asus’ second Zephyrus model for 2018 is the Zephyrus M GM501. Powered by the same 6-core i7-8750H as its sibling, this time it’s paired with the Nvidia GTX 1070 rather than the GTX 1080 in the GX501. While the GTX 1080 is clearly faster, for running games at 1080P resolution, the 1070 is more than capable. Special mention has to go to the innovative cooling system, whereby the rear of the case lifts up revealing vents when the screen is opened, allowing the laptop to maintain a slim profile, without compromising cooling and allowing the graphics chip to run at full speed with no throttling.

The screen on this model is another strong point. An IPS panel with a 144hz refresh rate that’s also G-Sync compatible. It’s a pleasure to look at.

Bottom line: The GM501 is capable of handling any current game you throw at it without breaking a sweat, with the added advantage of being beautiful to look at. Thin, light, powerful, an amazing screen with excellent viewing angles, and beautifully designed. What’s not to like? 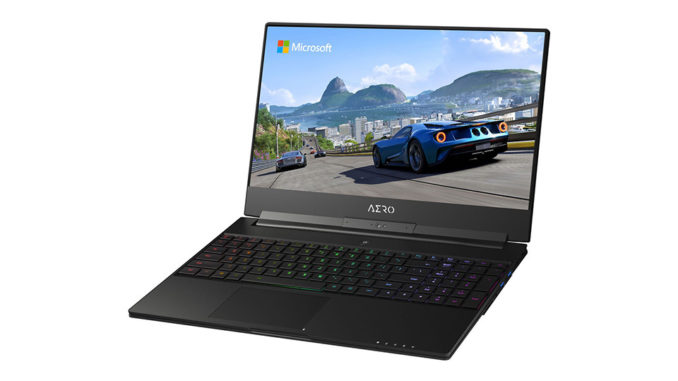 Another laptop taking advantage of Nvidia’s Max-Q technology to maintain a slim profile while still packing the kind of gaming power that you need for top-tier gaming in 2018. Gigabyte may be better known for their motherboards and graphics cards but this, their latest foray into gaming notebooks doesn’t disappoint. The 15.6″ IPS display has a 144hz refresh rate and some of the thinnest bezels we’ve seen on a gaming laptop which really makes it stand out against the crowd.

Rather than going for the all-out flashy gold red and black look of the majority of gaming laptops, Gigabyte have opted for a more refined, sleek black look reminiscent of Dell’s 2017 XPS laptop. This gives it an altogether more subtle, stylish look. Another thing it has in common with Dell’s machine is the placement of the webcam – which is placed below the screen rather than above it.

The Aero 15X is powered by the Intel Core i7 8750H 6-core CPU, paired with the Geforce GTX 1070 – a combination more than capable of running today’s games at ultra detail levels and maintaining smooth frame rates. 16GB of DDR4 memory and a 512GB SSD for storage complete the package.

Bottom line: A stunning screen, which is accentuated by the thin bezels and an understated, refined design of the chassis make the Aero 15X stand out. Gaming performance is excellent, and it’s light enough to carry around in a backpack all day. The only downside is the placement of the webcam, but this was necessary to keep the thin bezel at the top of the screen. 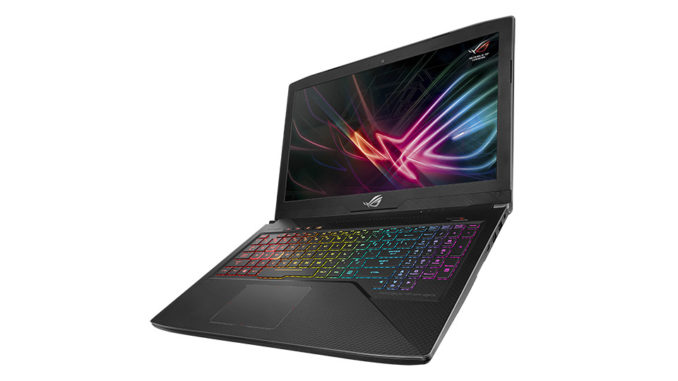 The ROG Strix SCAR edition is one of two new ROG Strix gaming laptops released by Asus in 2018. The GL703GM is designed with FPS gamers in mind, and features a large, 17.3″ display with an impressive 120hz refresh rat. The laptop is powered by Intel’s Core i7-8750H cpu and the Nvidia GTX 1060 graphics processor. While the GTX 1060’s may fall short of the GTX 1070 or GTX 1080 found in other laptops in this list, the 1060 is still more than capable of maintaining frame rates in the 60fps range at high details on modern games. However, if frame rates are more important to you, a more expensive version of this laptop – the GL703GS – is available with the GTX 1070.

Internal storage is provided by a 256GB NVMe SSD + 1TB SSHD hybrid drive and there’s also a single USB Type-C Gen 2 port for fast external storage. The chassis is mostly plastic, which is to be expected at this price bracket, but build quality is good and

Bottom line: An all-around capable gaming laptop designed with gamers in mind, and capable of delivering 60fps 1080p gaming without busting your budget. 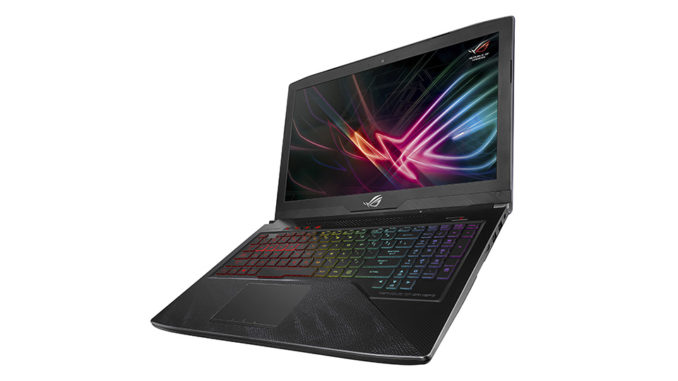 The HERO edition is available in two variants – one with the 6-Core i7-8750H CPU and the other, a more pocket-friendly quad-core i5-8300H. Both variants feature the Nvidia Geforce GTX 1050Ti with 4GB of GDDR5. In terms of gaming performance, while this is the least power GPU in the laptops on this page, it’s still a capable card and ideally suited to MOBA games, which tend to be slightly less demanding on hardware resources.

Although Asus do offer an i7 variant, we’d recommend saving your money and going for the i5 version, because the upgrade to an i7 isn’t going to reap a significant benefit in frame rates when paired with the GTX 1050Ti.

Bottom line: An excellent mid-range gaming notebook with a superb screen, with a capable GPU, and very fast storage. For MOBA gamers looking for a budget-friendly, but still very capable laptop, this is ideal. 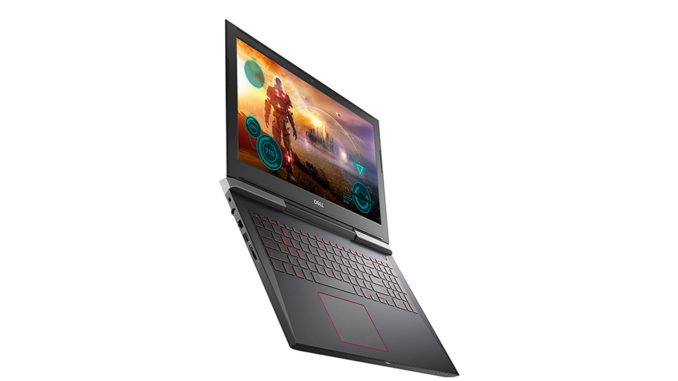 Dell’s catchily-named G5587-5859BLK-PUS was a surprise entry in this list. Powered by the latest Coffee Lake i5-8300H quad-core CPU, it’s paired with the Nvidia GTX 1060 GPU and 8GB of DDR4 2666Mhz RAM. While 8Gb is the least amount of RAM of any of the laptops in this list, real world test show that the effect on gaming between 8GB and 16GB is pretty minimal. It can be upgraded to a maximum of 32GB at a later date if you do feel the need to add more memory. The combination of the i5-8300H CPU and GTX 1060 make this a highly capable laptop for 1080p gaming (the native resolution of the 15.6″ display).

Aesthetically, this machine has a refined black finish with red accents and a red backlit keyboard, and it’s under an inch thin making it easy to carry around to gaming events.

Bottom line: Light and thin, with attractive design and good build quality. We’d have liked to have seen some better storage options, but the solid gaming performance and very attractive price makes this a strong contender for the budget-minded gamer on the move. 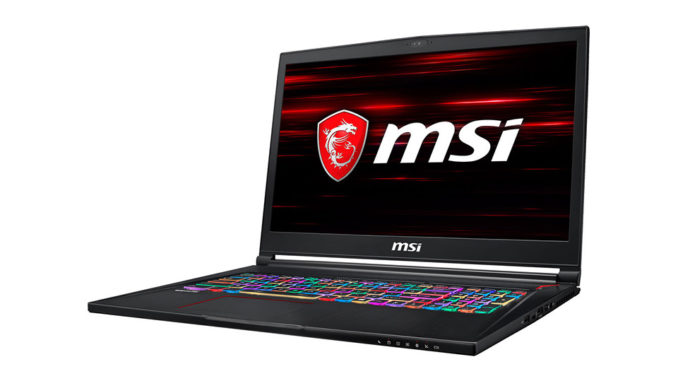 The keyboard is excellent – it feels solid, it’s a pleasure to type on, responsive, and features per-key RGB lighting. The 17.3″ screen has an impressive 120hz refresh rate, very good viewing angles and excellent colour reproduction.

What sets this apart from the other laptops in this list is the multitude of options for video output. As well as HDMI, the GS73 also includes Mini DisplayPort and Thunderbolt 3, so you can simultaneously connect multiple external displays running at 4k 60Hz.