Now that the final version of macOS 10.14 Mojave, has been released, many people have installed the new OS on their Hackintosh.

Several users, however, have reported the following error during installation.

This happens regardless of whether you’re performing an upgrade or a clean install, and whether the drive you’re installing to is formatted as APFS or HFS+.

So, what’s the solution?

If you’re installing to a SATA drive

After some investigation, and some trial and error, the only solution seems to be to physically disconnect all the drives in your computer, apart from the drive onto which you’re actually installing the new OS. Physically disconnecting the SATA cables from all additional drives before running the installer allows the install to proceed. 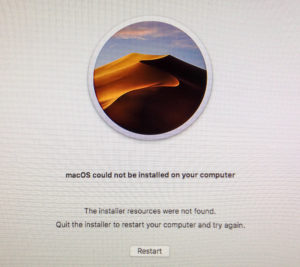 In my case, I had a total of four SATA drives connected internally – two SSD’s and two HDD’s. With the drives connected, I got the error message to the left, every time, without fail, after the first reboot.

After disconnecting the drives and leaving only the single SSD where the OS was being installed connected, the installation went through without problems.

Once the OS has been installed, you can safely reconnected all of the SATA cables.

If you’re installing to an NVMe drive

If you’re attempting to install Mojave to a NVMe drive, like the Samsung 960 EVO or the Samsung 970 EVO, the error seems to occur regardless of whether additional drives are connected or not.

In this case, your only solution is to physically remove the NVMe drive, install Mojave to a SATA drive and then use Carbon Copy Cloner to clone the SATA drive to the NVMe drive after installation.

There may well be a better solution in the future, but for the time being, at least, this seems to be the only way to get past the error.

Unfortunately the integrated WiFi chipsets on most PC motherboards aren’t compatible with macOS, meaning that if you want working WiFi, you’ll need an additional WiFi […]

Thinking of building a new Hackintosh? Here are four of the best GPU’s for a hackintosh build in 2019, chosen for performance, price, and the […]